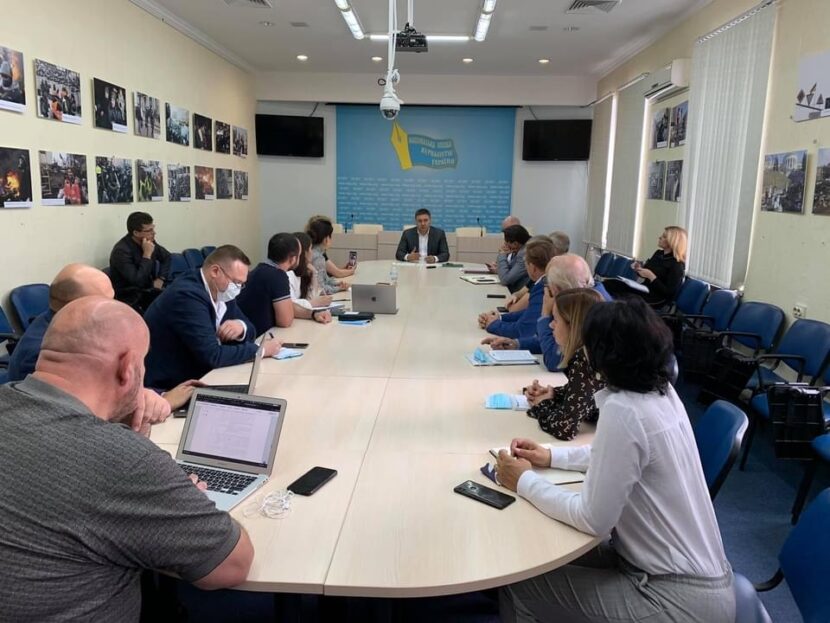 On September 29, 2020, in the conference hall of the National Union of Journalists of Ukraine, the members of the Association of Producers of Ukraine with members of the Ukrainian Business Council met with the Chairman of the State Fiscal Service Serhiy Solodchenko.

📍 During the meeting, the issue of creating the Bureau of Economic Security (EBB), which will counteract economic crimes in the state, will replace structures such as: the tax militia and separate specialized units of the SBU and the National Police years ago.

📍 The head of the DFS in his opening remarks said that after the introduction of the law, the main task is to liquidate the fiscal service and transfer all criminal cases to the newly created Bureau of Economic Security. Despite the high expectations, based on the substance of the Bureau of Economic Security Bill, we believe that this bill still needs to be worked hard!

▪️ the term for the creation of the new body and its authority;
▪️ liquidation of the DFS and the powers of business units in the SBU and the National Police;
▪️ Tracking the sale of smuggling and the activities of the shadow business in the domestic market of Ukraine, and what actions the Bureau will take in the fight against it;
▪️ Verification of documents for goods in the warehouses of wholesalers who position themselves as FOPI and form the so-called ” Fopo-farms ” with a single beneficiary, in order to use a simplified taxation system;

These and some other important issues were discussed yesterday by representatives of Ukrainian business with the head of the State Fiscal Service Serhiy Solodchenko.

📍 Normal conditions for the development of market relations and the economy in the state are created by certain favorable factors, among which the issue of protecting business from the arbitrariness of law enforcement and control bodies plays an important role.

📍 The new body will have incredible authority for receiving, accumulating and processing data on the activities of taxpayers, and how will it use this information?

📍 According to the concept of the bill, the new body is purely law enforcement and will be more concerned with identifying and investigating crimes already committed. But does it make sense to create a Bureau if the bill does not actually deprive the SBU and the National Police of the right to interfere in business activities? Separate subdivisions of the SBU and the National Police, and the DBR, actually accept business as a criminal organization, seeing the enemy in every taxpayer that comes into view. The methods of work of such bodies in relation to business entities are not much different from the methods applied to criminals. In every search for masked law enforcement officers with weapons, every letter aimed at counterparties describes the facts as a verified crime that harms business reputation, instead of copying information from servers, they were simply removed from the representatives of white business, which caused significant damage years ago … his reputation and performance!

📍 It is not yet clear how the Bureau will monitor and deal with shadow business in Ukraine. Is it possible to create a Unified Register of White Sellers “who do not sell” gray imports “and do not hide behind the name” FOP “, having large stocks of goods and using a simplified taxation system.

📍 The society has not received an answer to the repeatedly voiced questions from the initiators of the law, and by how many people will the total number of law enforcement officers in the state be reduced due to the elimination of the tax police and the reduction. Economic units in the SBU and the National Police are planned and in which the total number of people will be reduced. Will the cost of the state cost the liquidation of the MFS?

📍 The tax police will be liquidated, and a new body, as experts, will not be selected soon. Consequently, the period, according to previous calculations, from one to two years, the white business will be left alone with the shadow business and the entire team of law enforcement agencies. It is clear that in such non-competitive conditions a law-abiding business will be powerless in the face of the arbitrariness of the shadow economy. ”We hope that the government will do everything possible to avoid this uneven force of struggle!

📍 We believe that only a high level of remuneration and social protection of future employees of the bureau can become the key to a significant reduction in corruption risks among its employees. Instead, the bill does not set clear criteria for high wages or employee benefits.

📍 Only changes that are implemented in the interests of society, and not the authorities, therefore we believe that the bill should establish clear rules for interaction between government and business, and in the absence of guarantees for business from the arbitrariness of the law The system, the current bill needs a radical redevelopment with mandatory consideration of proposals for business environment, to create a competitive business environment.