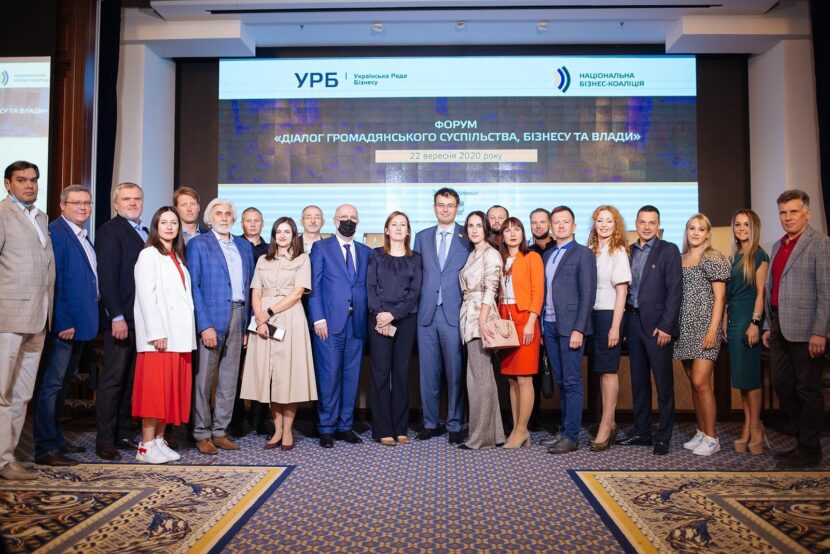 The Verkhovna Rada and the Cabinet of Ministers are ready to make all the necessary changes proposed by Ukrainian entrepreneurs. This is the result of the Forum "Dialogue of Civil Society, Business and Government", which took place on September 22, 2020 in Kyiv. The event is organized by the Ukrainian Business Council and the National Business Coalition, participants - representatives of business associations, MPs of Ukraine, members of the Cabinet of Ministers of Ukraine. The event was supported by the Center for International Private Entrepreneurship (CIPE).

Representatives of business associations discussed with members of the government and parliament the top 10 steps that business identified as priorities more than a year ago. According to the Chairman of the Committee on Finance, Tax and Customs Policy Danylo Hetmantsev, the necessary actions to implement these priorities have already been taken.

D. Hetmantsev noted that a concept of changes has already been developed to reduce the burden on the payroll. But it can be implemented only in cooperation with the executive branch. He also said that he expects the adoption of the Law on the Bureau of Economic Security by the end of October - work is underway on amendments to the second reading.

In addition, the chairman of the committee stated that nothing hinders the institutional reform of regulatory bodies, which is what business insists on - the issue is exclusively in the implementation of laws. "This is a fundamental direction for us. The last law needed for this was adopted in January this year. The executive needs to run it all. There are no obstacles, we need political will, "Hetmantsev said.

However, he did not agree with the need to adopt a new Tax Code, because it would be a shock to business. "I am in favor of reviewing three key things: income taxation, which also includes withdrawn capital, environmental tax and local taxes. Three points that need to be significantly improved without shocking the business with a new version of the sections on other taxes ", - summed up the chairman of the committee

Deputy Head of the Office of the President Yulia Kovaliv also said that business should not be shocked, but supported. According to her, it is necessary to implement point programs to support specific sectors or sectors of the economy.

According to her, a prerequisite for the development of business and the banking sector is a transparent judicial reform. Currently, the Office of the President is working with experts and international partners on a project, which, in particular, provides for the reset of the High Council of Justice and the High Qualifications Commission of Judges. The project is due to appear in Parliament in a few weeks.

During the conversation, the topic of the tax on withdrawn capital was also raised. We will remind, in the list of TOP-10 business associations insist on replacement of the income tax by the tax on the withdrawn capital. According to the Chairman of the Committee on Economic Development Dmytro Natalukha, he is a supporter of this approach, it will stimulate investment and promote business development.

"Hot discussions are taking place now. I am sure that it will not be adopted as a law by the end of the year, but we will have time to consider it in the hall in the first reading, "said Mr. Natalukha.

In turn, the Minister of Economy, Trade and Agriculture of Ukraine Ihor Petrashko spoke about the government's forthcoming plans. According to the official, next year GDP growth is expected to reach 4.6% and economic recovery due to the continuation and improvement of the lending program "5-7-9%", the introduction of state portfolio guarantees, expanding state support for the agricultural sector. In addition, Mr. Petrashko promised that the program "5-7-9%" will be expanded to medium-sized enterprises and additional purposes.

Business representatives expressed their views on these issues. The President of the Association of Taxpayers of Ukraine Grigol Katamadze reminded that the President of Ukraine has an advisory body - the National Reform Council, which includes representatives of all branches of government. Therefore, nothing prevents them from making the right decisions and seeking their implementation.

"Everything that we have worked out at the level of the expert community is to help make a bill closer to the ideal," said the expert.

He noted that in order to create an effective Financial Security Bureau, it is necessary for the newly created body to deal with analysis, not just inspections. "If we do not amend the Criminal Code, do not define what analytics is, how it is conducted, it will be a body with functions that will simply come to business more often. It is important that we create this body on the basis of risk-oriented approaches, "Grigol Katamadze summed up.

Mykhailo Sokolov, Deputy Chairman of the All-Ukrainian Agrarian Council, noted that at least a minimum tax burden must be paid per hectare of agricultural commodity land. A minimum must be set below which you cannot pay. Therefore, the main question for farmers is when the bill 3131-d will be adopted.

In her turn, Sofia Araslanova, Director General of the Ukrainian Consumer Electronics Importers Association, noted that smuggling remains a big problem for both white business and the country as a whole.

"If you look at the dynamics, last year - the amount of smuggling over 300 billion, and losses of 96 billion UAH. In this situation, the demand for the goods of a white importer falls, it becomes uncompetitive. The consumer is not protected either. The market is full of illegal goods. There is no control within the country, which allows conglomerates to concentrate pseudo-FOPs, united by a single beneficiary and a control center. One of the promising countermeasures is cashback for the consumer, which we expect to implement next year. This will allow inspections to be targeted for specific violations, "Ms. Araslanova said. She stressed the need to amend the legislation on the separation of genuine micro and small entrepreneurs from large businesses that abuse "simplified", and drew attention to the analytical study of the "Kyiv School of Economics" on this topic entitled "Tools to prevent abuse of the simplified tax system in Ukraine. International experience and recommendations »

Oleksandr Kovalchuk, Deputy Chairman of the Parliamentary Tax Committee, agreed, noting that smuggling is thriving in the country because there is a demand for it. This is especially true of online sales, which are difficult to control.

"The online sales market in Ukraine reaches 2.5 trillion hryvnias. And the clumsy system with which we account for online sales, among other things, gives a huge impetus to increase gray and black imports. Sales of products without the presence of RRO becomes much easier. RRO is one of the tools that will reduce the demand for gray and black, "Kovalchuk said.

The deputy also said that now, together with representatives of relevant associations, work is underway to develop a project to support the IT industry, the project will be registered soon.

Yulia Kovaliv added that since August 1, when the software RRO system was introduced, 20 million electronic checks have been issued. And the more entrepreneurs are involved in this system, the more transparent the business will be and the narrower the opportunities for abuse.

Danilo Hetmantsev summed up the discussion and said that a new draft law that would liberalize the use of RRO, as well as exempt from the use of RRO for those who do not find it economically feasible, will be published for discussion and called on SME representatives to participate in discussions and proposals.

Following the Forum, the participants of the discussion reached a common vision on almost all issues raised and agreed on further joint work on the implementation of the TOP-10 priorities.